The Basics About Chikungunya: Preventing and Stopping the Virus

Mosquitoes are extremely annoying and can cause painful bites and welts. If you’ve ever had a camping trip spoiled by mosquito bites or have been kept awake at night by the irritating drone of a mosquito in your hotel room or bedroom, you already know that mosquitoes can be a nuisance.

Many people also know that these insects can carry diseases. While West Nile virus and malaria get a lot of attention, fewer Americans have heard of Chikungunya. According to experts, more Americans may soon be hearing about this virus, which has traveled to the Caribbean, Jamaica, Florida and other parts of the Americas.

Chikungunya is a virus that affects people and is transmitted by mosquito bites. Specifically, the virus is usually spread through Aedes aegypti and Aedes albopictus mosquitoes. These two types of mosquitoes are very common throughout the world, especially in warmer locations such as Asia, Africa, parts of Central and South America as well as the Southern areas of the United States. Both Aedes aegypti and Aedes albopictus mosquitoes are notable because they have white stripes and markings on their legs and bodies.

How to Pronounce Chikungunya

Chikungunya is pronounced chik-en-GOON-ye. The word comes from the Makonde language of Africa. In that language, Chikungunya means “bent over in pain” or “bent up,” indicating how much patients suffer with this painful virus.

Yes, the virus is contagious. It is spread through mosquito bites. During the first week that someone is infected, the virus is found in their blood. If during that week the infected person is bitten by a mosquito, the mosquito can then pass the virus to other people it bites.

There are two main ways that the virus enters an area:

Local transmission cases can obviously be dangerous because they prove there are infected mosquitoes in an area, which can create the possibility of an outbreak. However, imported cases can also be dangerous because a patient can be bitten by a mosquito at home, allowing the infected mosquito to transmit the virus, paving the way for local transmission. A local population may not have any resistance to the virus because they have not been exposed to it before, so they may be more vulnerable. This can create the basis for an outbreak.

As the virus travels to new countries and territories, there is also a risk of transmission since doctors may not identify the virus. A patient who travels to a foreign country and returns with a fever or who becomes one of the first patients to get the virus through local transmission might stump local doctors, who have not seen the virus before. That patient may have a difficult time getting the right medical help and might not get important information about preventing the spread of the virus.

A Chikungunya outbreak can technically occur in any country with mosquitoes. In the past, outbreaks have occurred in Europe, the Indian Ocean, Asia, Africa, and the Pacific Ocean. In 2013, however, cases of the virus were found in the Caribbean, leaving some experts worried that the virus could eventually spread to other areas. Since 2013, reports of the virus have been found in territories all across the Americas. By May 2015, more than 1.4 million cases had been reported.

One concern is that the mosquitoes that carry and transmit the virus live in many parts of the United States, meaning that outbreaks of Chikungunya could potentially happen in Florida and other parts of the South. Chikungunya can also pose a risk in Costa Rica, Mexico, and other warm areas of the Americas where mosquitoes can be found. 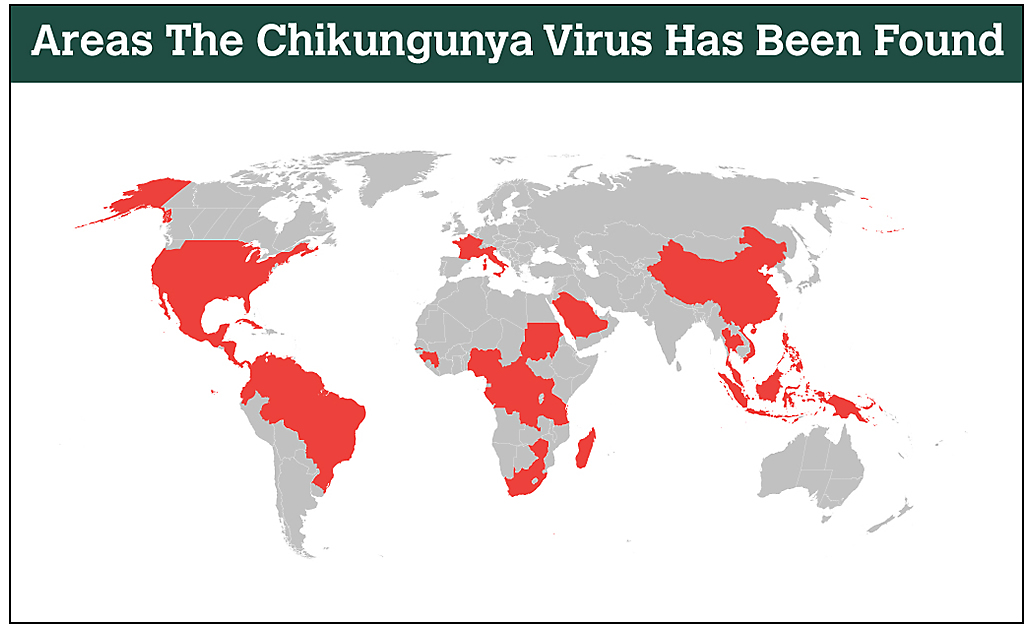 According to the Costa Rica Health Ministry, as of January 2015, 106 people in that region had been infected with the virus, with 70 of those cases occurring through local transmission. By late 2014, eleven local transmission cases of the virus were reported in Florida. In Puerto Rico, more than 10,000 people had been affected by the virus. Also in late 2014, Jamaica declared a state of emergency after more than 800,000 suspected cases of the virus were reported in the Caribbean.

It’s important to note that rates of infection may eventually become higher as the disease spreads. The numbers may already be higher because not all patients experience strong symptoms that require a visit to the doctor. Some may assume they have the flu and not realize they had the virus when they get better a week later.

Anywhere travelers go, they can bring the virus with them. There’s a risk that the virus will be imported to new areas by infected travelers, where it can become an outbreak. Where there is an outbreak, it can affect 38% to 63% of the local population. 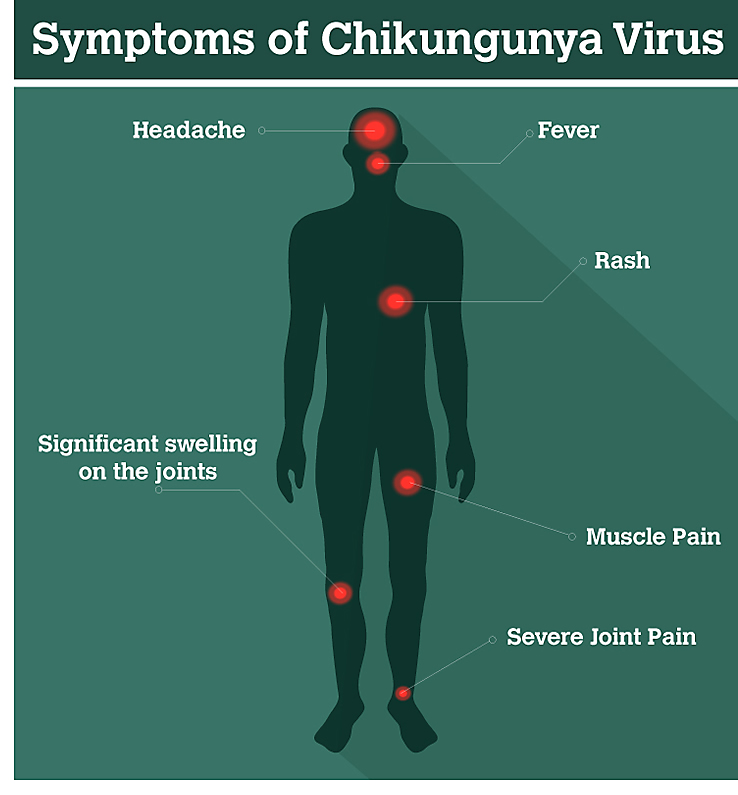 Chikungunya symptoms can vary from person to person, but can include:

Symptoms usually show up within 3 days or a week of being bitten. In most cases, patients will recover in a week from the symptoms, although recovery times can last months or even years in some cases.

If you think you may have the virus, speak to a doctor who can offer a Chikungunya diagnosis as well as medical treatment. Although there’s currently no known medication to treat the condition, doctors can help monitor the patient and can help treat symptoms. In addition, you may be asked to take steps to avoid transmitting the virus.

The virus is not considered fatal and it does go away in most cases. In fact, someone who has been infected once is usually protected from later infections. If you have had the virus and are bitten by a mosquito carrying the virus again months later, you’re unlikely to catch the virus again.

Although it’s not usually fatal, Chikungunya can sometimes lead to very painful and even debilitating symptoms. Some patients experience incapacitating joint pain and swelling for months or even years after infection. In some cases, the pain and swelling can be serious enough to become a disability.

Infants and the elderly are more vulnerable to this virus. If the virus affects a vulnerable person or someone with additional medical problems – such as hypertension or heart disease, for example – Chikungunya can cause serious complications that could potentially be life-threatening. Infants can also succumb to the virus because their smaller systems may not be able to handle it easily.

Most healthy adults do not require a hospital stay with this virus. However, the pain is significant enough that patients may need to rest at home in bed for a week, or even a few weeks. Doctors may prescribe paracetamol, ibuprofen, naproxen, or acetaminophen for the pain and fever. In addition, patients need to drink plenty of fluids because the high fever can lead to dehydration. Patients are often told to sleep under a mosquito net or to take other precautions to help prevent mosquito bites that could transmit the virus to others. 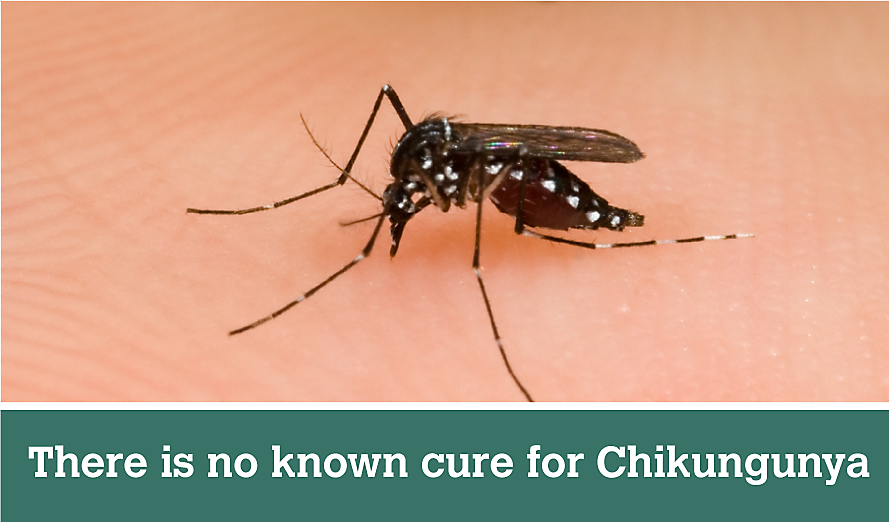 Patients should be watched carefully. The intense pain and the high fever can lead to weakness, dehydration and potentially other complications – especially in patients with underlying conditions. The elderly and individuals with serious conditions other than the virus may need to be admitted to the hospital if they develop difficulty breathing or other complications due to the pain and high fever of the virus.

Is There a Chikungunya Vaccine?

Currently, there is no known vaccine for the virus and no treatment or medication for the condition. However, it’s still important to visit a doctor if you think you may have the symptoms. A medical professional can offer treatment for some of the symptoms of the condition.

One of the most effective ways to prevent Chikungunya is to reduce the number of mosquitoes and insect bites that can occur. There are a few ways to do this:

Chikungunya is a serious virus that can affect you for days or even months. The pain you may face with this virus is intense, and if you have a serious condition, Chikungunya may even be life-threatening. To protect yourself and your loved ones, stay alert to outbreaks and take steps to prevent mosquito bites.

One way to protect yourself against Chikungunya and other viruses or diseases mosquitoes can carry is to reduce the number of mosquitoes near your home. One way to eradicate mosquitoes is with a Mosquito Magnet® trap.