Across the U.S., invasive species are responsible for “the decline of 42 percent of the threatened and endangered species” and cost the economy an estimated $120 billion annually.

Invasive species can be insects, plants, fish, or wildlife that originate in one part of the world but end up in different habitats as a result of globalization and where their presence disrupts the natural ecosystem, sometimes destroying it. They can be a threat to the environment as well as to human health – like the Asian tiger mosquito, an invader of the U.S. that was recently linked to the Zika virus.

To help understand how invasive species impact the global ecosystem, we utilized data from the Centre for Agriculture and Biosciences International (CABI) to observe the invaders most common around the world, the countries with the highest percentages, and how these organisms impact states across the U.S. Continue reading to learn more. 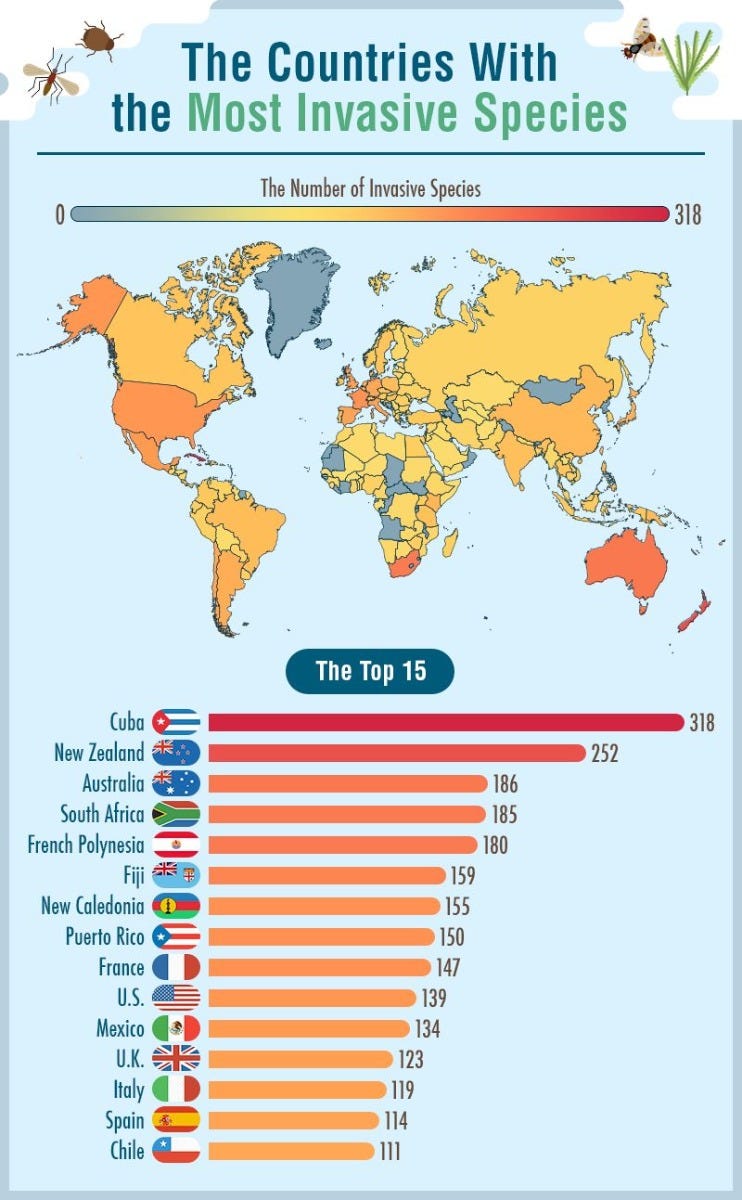 To date, Cuba has more invasive species across its nearly 43,000-square-mile island than any other country in the world. Like the brown anole and lionfish, invasive species in Cuba have made residents consider innovative ways to manage the intrusions caused by these creatures.

The invasive lionfish has impacted the survival of smaller fish in the coral reefs surrounding Cuba and has forced residents to start consuming the fish as a way of preserving the balance of their aquatic ecosystem. As relations between Cuba and the U.S. continue to improve, U.S. scientists have been in communication with Cuban officials to help regulate the invasion of species in the U.S.

In New Zealand, CABI data report there are more than 250 invasive species, making it the second most infested country in the world. In 2016, the prime minister of New Zealand announced plans to eradicate all of the invasive rats, short-tailed weasels, and possums by 2050 – costing the country at least $20 million.

Of the most common invasive species around the world, those within the class Dicotyledonae top the list with close to 4,000 instances of invasive plants and foliage around the world. For example, the toxic leafy spurge (Euphorbia esula) is an invasive form of Dicotyledonae that can grow over 3 feet above ground and up to 15 feet underground and quickly overtake native plant species due to its size. The leafy spurge can be found in 20 states across the U.S., including California, Oregon, and New Jersey.

Insects (referred to as insecta) account for more than 1,700 instances of invasive species around the world. In Louisiana, an invasive species of insects from the Aclerdidae family (otherwise known as scale insects) – which are native to Japan and China – are destroying the state’s coastline by feeding off of the natural vegetation. As of this writing, scientists have yet to fully identify exactly which species the insect belongs to and aren’t currently aware of how to destroy it.

Monocotyledonae, a class of host plant species, also has nearly 1,400 varieties of pests across the world. The water hyacinth, which is native to South America but also found in Asia and the U.S., spreads so quickly it’s considered one of the most troublesome weeds in the world.

Invasive Organisms Around the World

According to CABI data, Cuba has the highest number of invasive Dicotyledonae and Monocotyledonae, both of which are classes of plant species. A 2013 report out of Havana has linked the aggressive spread of invasive plant species over time to climate change. Cuba’s mean annual air temperature rose over the second half of the 20th century, and it is projected to increase by upwards of 2.5 degrees Celsius by 2100. Like the Australian pine (a Dicotyledonae plant), these invasive plants are having a deeply negative impact on the rivers and lakes in Cuba.

The largest number of invasive insects has been reported in France (30). While not all invasive species are truly detrimental to the ecosystems they inhabit, Europe has identified a number of insects and plants it would like to see eradicated. In France, insects like the yellow-legged hornet (Vespa velutina) attack other pollinators like wasps and honeybees. The hornets’ impact on bees has resulted in the loss of 14,000 honeybees per hive each month in France. As studies have shown, the loss of honeybees would be catastrophic to the global ecosystem.

Across the world, the cottony cushion scale (Icerya purchasi) has invaded the most countries. Once attached, it extracts a significant amount of sap from the host plant, causing defoliation and branches and trees to die. It also leaves behind a mold growth that blocks air and light from reach the host plants leaves, reducing the process of photosynthesis and the productivity of fruit and forest trees. The cottony cushion scale is currently found in more than 100 countries around the world, including 15 states in the U.S. including Florida, Georgia, and Texas.

The spirea aphid (Aphis spiraecola) has also been identified in 100 countries and in nearly every state across the U.S. These tiny insects have been known to infest vegetable fields where they form colonies that suck the juices from the host plants. Still, despite their widespread presence, they aren’t currently identified as a quarantine pest by the International Union for Conservation of Nature (IUCN).

Invasive species around the world including the apple of sodom (Calotropis procera), lantana (Lantana camara), and Eastern mosquitofish (Gambusia holbrooki) have also been identified in more than 80 countries, ranking them among the top five most common invaders on the planet. While the Eastern mosquitofish can negatively impact the aquacultures it inhabits by competing with or hunting other fish, some cities in the U.S. are providing mosquitofish to residents to help combat mosquitoes during the summer months. 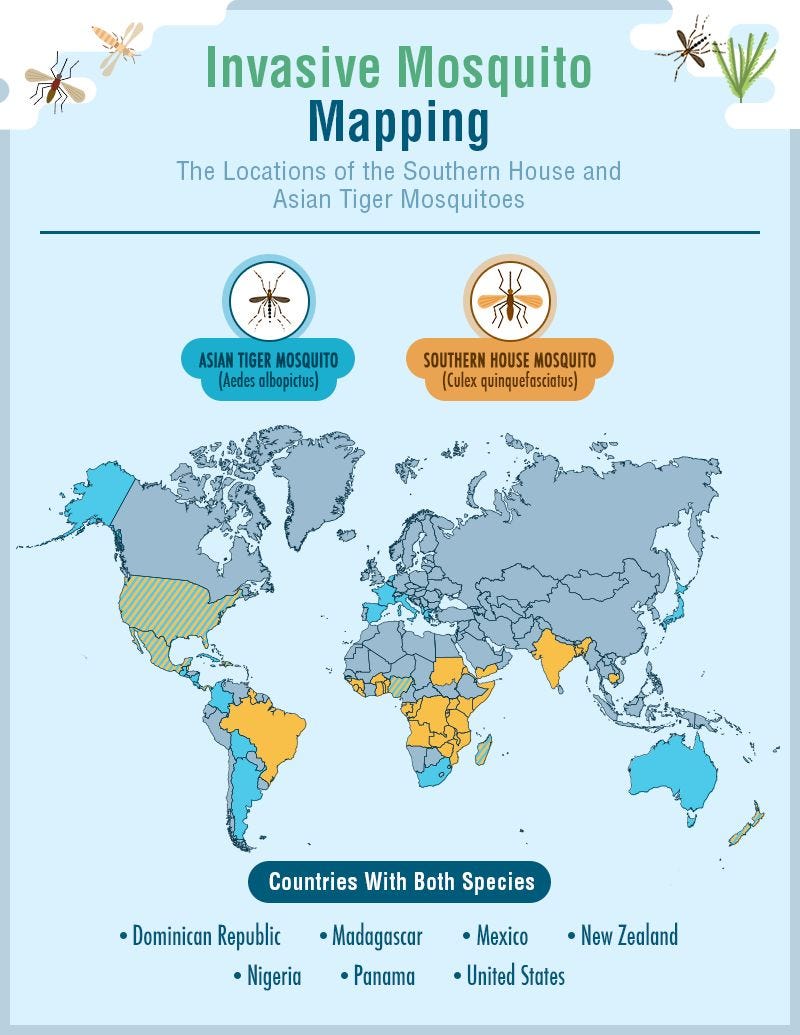 Mosquitos are common all across the world, and they can carry deadly diseases like the West Nile virus, malaria, and Zika. Two common mosquitos in the U.S. – the Southern house mosquito and Asian tiger mosquito – have been linked to the Zika virus.

Research hasn’t proven the Asian tiger mosquito can spread Zika, but a 2017 study has shown evidence that it could. It is theorized that the Asian tiger can spread the Zika virus through its eggs, especially in the warmer summer months.

Another common U.S. mosquito, the Southern house mosquito, has been linked to Zika in recent studies. Around the world, both of these mosquitoes are present in seven countries, but at least one of them is present in 66 countries across the planet. 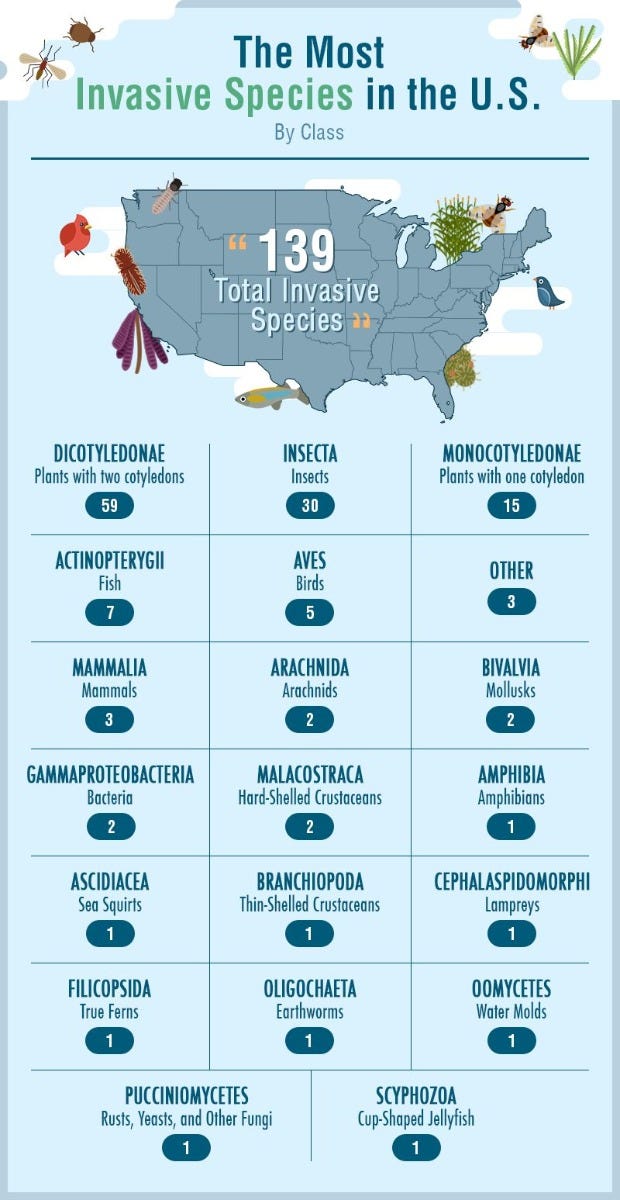 Across the U.S., there are 139 invasive species plaguing plants, animals, and humans alike. The most common class of invaders is Dicotyledonae, which account for nearly half of the invasive species in the country. Including weeds like the bristly starbur (Acanthospermum hispidum), some Dicotyledonae can prove not only hazardous to crops, but also to livestock. The quickly germinating seeds of the Norway maple (Acer platanoides) make this tree similarly invasive, and its rapid rate of growth hinders the proliferation of native flora in forests all over North America.

Insecta also accounts for 30 invasive species found in America. Like the emerald ash borer (Agrilus planipennis) found in the Midwest, the borer has ruined millions of ash wood trees by boring holes into their bark since arriving in the U.S. in 2002 from Russia, China, and Japan.

Other common classes of invaders include the Monocotyledonae (flowering plants), Actinopterygii (bony fish), and Aves (birds).

How And Why Invasive Species Found Their Way to Foreign Locations

While many of the invasive organisms we’ve studied may not seem dangerous on their own, about 42 percent of all endangered or threatened animals on the planet are at risk due to invasive species of animals, insects, and plants. Here are a few of the primary ways invasive species came to be in new areas of the world and a danger to the creatures around them.

Why Invasive Species Are Bad

Beyond invading local ecosystems, unwelcome species of plants, insects, and animals pose a threat in more ways than one.

What Invasive Species Are Present in Your State or Province?

In the U.S., plants in the Dicotyledonae class make up the largest percentage of invasive species, but insects like the emerald ash borer and Asian tiger mosquito have invaded ecosystems across the country and pose a significant threat to both the environment and human health.

By utilizing the CABI database, you can learn about the invasive species that are putting your local ecosystem at risk. While controlling or even stopping invasive species from doing what they do best can be extremely difficult, there are important steps people can take to fight back, such as advocating for new legislation and educating those who may be directly involved in taking care of the environment. Removal efforts can also help restore balance to local ecosystems.

For this project, we tapped into CABI’s (Centre for Agriculture and Biosciences International) Invasive Species Compendium to see which invasive species are currently most common around the world. By collecting information from their neatly compiled compendium, we were able to sum all instances of each species, their kingdom classification, and how many countries in which they are currently present. Data from CABI is always evolving and may, at times, be only partially correct as more data and interpretations are uncovered. A species was considered to be “present” if they were classified under one of the following distribution types, as per each species distribution table:

Does our research intrigue you? Would you like to share this information with your readers? We invite you to do so for noncommercial use only. When sharing, please provide readers with a link back to this page, so they can read more about invasive species and view any additional research.