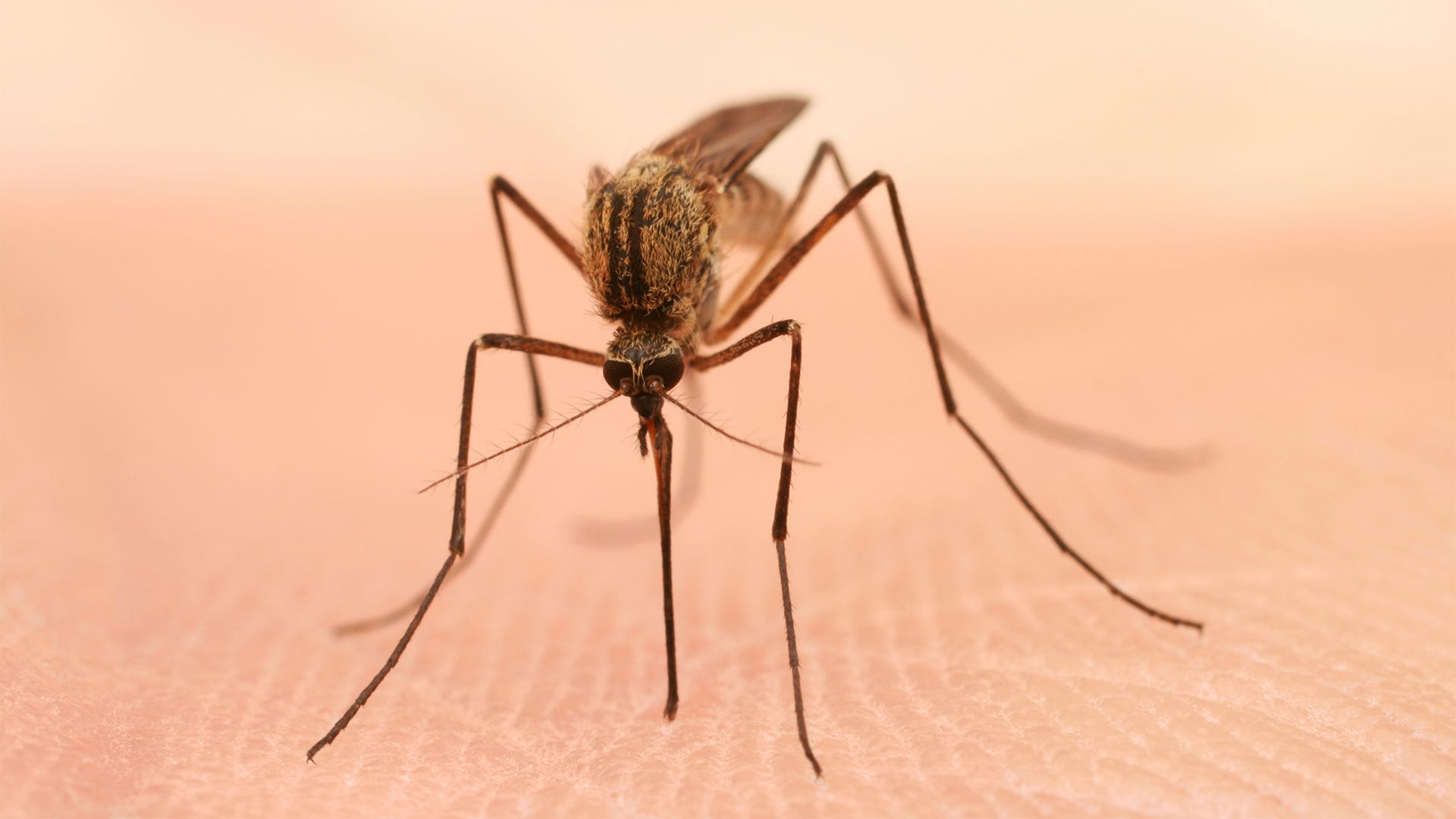 Mosquitoes are the deadliest animal in the world, killing more than 1 million people per year. These stealthy creatures bite us and fly off, and we don’t even know they’ve attacked until the itch begins. Sometimes they leave behind a deadly parasite or virus. We’ve all been bitten by mosquitoes, some more than others, but do we really understand what is happening when this pest is biting us? Mosquitoes are far more complex than most people give them credit for.  Often called a flying syringe, the mosquito uses its proboscis to drink blood from an unassuming animal, which seems like a simple idea, but did you know that the proboscis is actually an intricate system of different pieces? 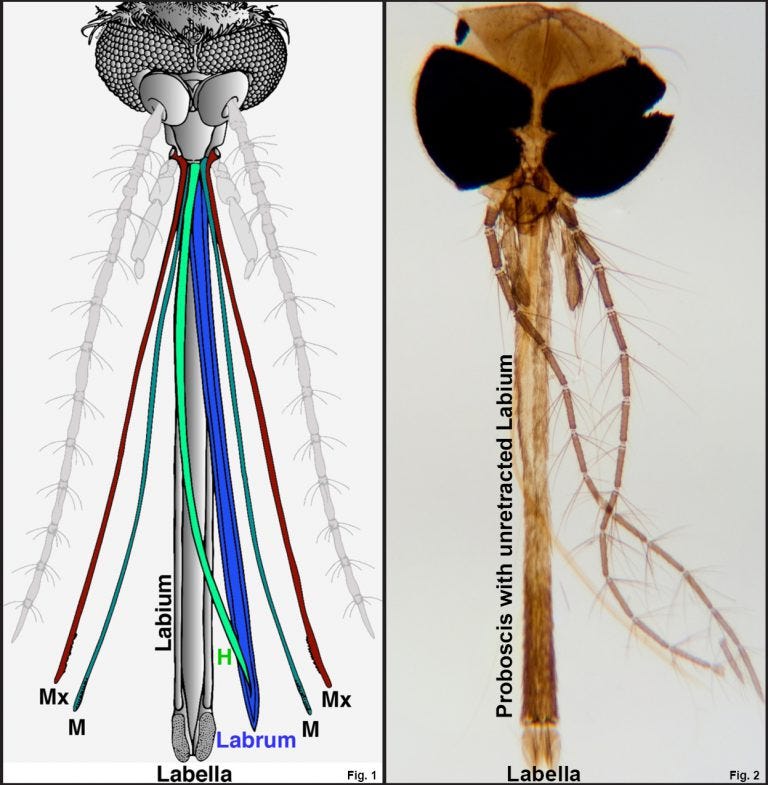 Proboscis: (Fig. 2) The exterior feeding structure of the mosquito is known as the proboscis. In mosquitoes this feature is made of several different parts. Stylet: Stylet is the term for the mouthparts which actually pierce and enter the skin; maxillae, mandibles, labrum, hypopharynx.

Fascicle: The term for a collection of stylets. In this case, it is comprised of: a pair of maxillae, a pair of mandibles, the labrum and hypopharynx.

Labium: (Fig 1. grey) The labium is the outer sheath of the proboscis. This sheath folds back as the fascicle enters the flesh of the victim.

Labella: The tip of the labium contains two sensory probes, called labella, which aid the mosquito in its search for a good place to bite. This part, in conjunction with the labium, could also be described as the lips of the mosquito, which remain outside of the skin of its prey, while the fascicle is inserted beneath the skin.

Maxillae: (Fig. 1 Mx/red) Maxillae are serrated structures used to saw through the skin – you don’t feel the sawing action because they’re so sharp and so small. A mosquito’s mouth is an elongated version of a typical insect mouth. In ants, for instance, this part would be what is used to chew through leaves.

Mandibles: (Fig. 1 M/dark green) While the maxillae go to work sawing through the skin, the mandibles hold the tissues apart. Imagine eating a steak: one hand (mandible) is holding the fork, while the other hand (maxillae) is using a knife to slice through the meat.

Labrum: (Fig. 1 blue) The labrum acts as a probe, searching for a blood vessel beneath the skin. Receptors in the labrum can detect blood, as if following a scent, leading it directly to the closest blood vessel. Once it finds and pierces a vessel, the gutter-shaped labrum sucks in the blood with the help of the hypopharynx. In this video you can see the labrum probing and, ultimately, finding a blood vessel.

Hypopharynx: (Fig. 1 light green) Working in tandem with the labrum, the hypopharynx lays on the labrum to create a straw-like structure. The hypopharynx begins pumping saliva into the victim as soon as the fascicle pierces the skin to stave off our immune response, lubricate the proboscis, keep blood from coagulating and dilate our blood vessels.  This piece could be thought of as the tongue of the mosquito.

How do Mosquitoes Find you?

Female mosquitoes are looking for a blood meal in order to properly form her eggs. In order to detect a proper blood meal, females are equipped with special structures called cpA neurons, these nerve cells have a receptor that detects carbon dioxide and skin odorants such as perspiration and lactic acid. Additionally, the mosquito is attracted to heat and infrared light. It is the combination of all of these factors that leads the mosquito to a successful bite. 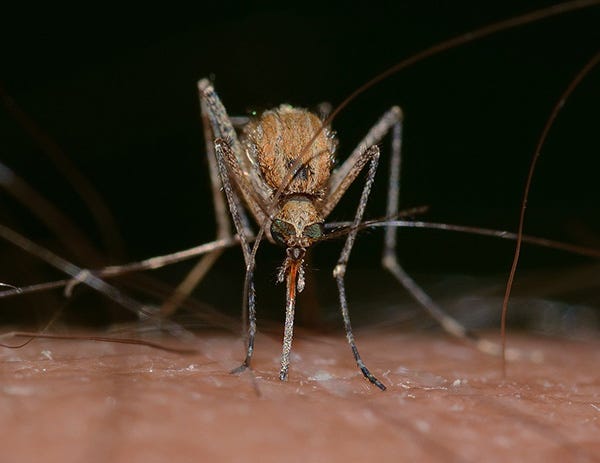 A typical mosquito bite begins with the female mosquito landing and probing with the labella to find a perfect spot. When she has found the right place to bite, she sinks her fascicle into the skin while the hypopharynx pumps out saliva. The labrum begins probing for a blood vessel. Once a blood vessel is found, the hypopharynx lays on the labrum creating a tube which pulls in blood and fills the mosquito’s abdomen. The blood is filtered within the mosquito, separating the water from the red blood cells – the water is then expelled from the rear end so that she can get the maximum amount of nutrition from the blood. This step allows a mosquito to ingest about five to ten times more nutrients than it would have with unfiltered blood. If you’re ready to watch the mosquito in-action, here’s a great video from PBS that explains how these mouthparts all work together.

Fun Fact: Inside of the stomach of the mosquito there is a nerve that indicates when the stomach is filled. If that nerve were to shut down, the mosquito would not stop drinking and burst from the pressure.

Myth Busted: No, you cannot make a mosquito explode by flexing a muscle.  The theory is that you can trap the proboscis in your arm or leg by flexing a muscle, which stops the mosquito from leaving, forcing it to keep drinking until it explodes. This is absolutely not true (PDF).

If you have never been bitten by a mosquito before, your immune system will not have developed antibodies devoted to fighting the foreign chemicals in mosquito saliva, so you won’t have an itch. However, once this has occurred, your immune system responds to the bite with histamines meant to attack and destroy the foreign chemicals left behind by the mosquito. The histamines make cells in the blood vessels spread apart, causing fluids to leak out into the skin, and these extra fluids cause a bump. The bump triggers other receptors and leads to itching. If bitten enough times, like those who feed mosquitoes in a lab, the immune system response becomes so strong that you may stop developing itchy bumps altogether.

Not only does the potent mosquito saliva keep us from detecting the mosquito’s presence by stopping our immune response, this is also how the unwitting creature spreads diseases. Since its saliva thins the blood, it makes it easier for a virion (complete viral particle) in the saliva to hop into our blood stream and infect our body. Malaria can get all the way to the liver within 20 minutes of being injected into our systems.

Now that you know more about how the mouthparts of a mosquito work, you’re likely thinking about how to keep them far, far away from you. Experts recommend using repellents, covering all skin, eliminating standing water around the house and setting traps to decrease populations of mosquitoes in your immediate area. Mosquito Magnet® mosquito traps use the mosquito’s own biology against it. The trap emits carbon dioxide, combined with a lure that mimics body odors to attract the mosquitoes. Once they come close, they are sucked up by the patented CounterFlow™ technology into the trap where they dehydrate and die within 24 hours. Fewer mosquitoes mean fewer chances for a mosquito to sink its 6 needle-like mouthparts into your skin. For more mosquito updates and information be sure to follow Mosquito Magnet® on Facebook. Never miss an article or a discount on Mosquito Magnet® products by signing up for our e-Newsletter.