Each spring when the weather warms and people emerge from their winter hibernation, mosquitoes too become active. Once outdoor temperatures rise to 50 degrees Fahrenheit, mosquitoes begin to emerge from hibernation. This means as soon as you begin your outdoor activities, these pests are already out for blood. 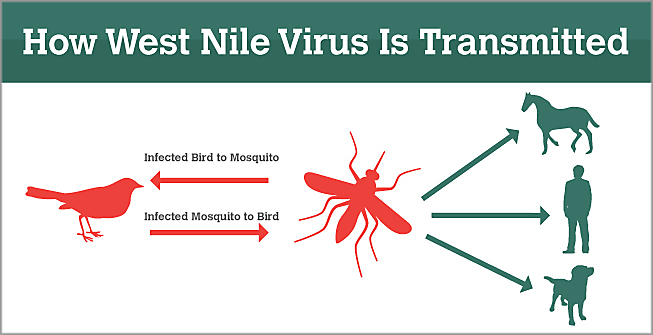 Mosquitoes began transmitting West Nile Virus in the U.S. around 1999. The virus was first found in humans living in the New York area, but it has since spread across the entire United States. Mosquitoes contract the virus when they bite birds infected with the disease. Birds can become infected through mosquito bites as well. Some birds, like hawks, owls, and other scavengers, can contract the virus from eating other dead birds.

Most birds that contract the virus live, but some birds, like jays and crows, often die. There is no evidence that people can contract West Nile Virus from birds, but as a precautionary measure, never touch or dispose of dead birds without wearing gloves.

Mosquitoes transmit the virus when they feed on you. Female mosquitoes are the biters. They need a blood meal to help them produce their eggs. Mosquitoes have skin-piercing mouth parts that inject a tiny amount of saliva into your skin before drawing out blood. The saliva helps prevent clotting, so the mosquito can easily draw out your blood. This mixing of saliva and blood is what transfers West Nile Virus to humans. 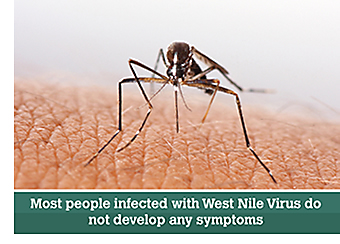 Once bitten by an infected mosquito, people can begin to show symptoms in as little as two days, but it can take up to 2 weeks, according to the CDC. Only about one out of every five people bitten by a West Nile mosquito actually show symptoms, like a fever, but it is important to know what symptoms to watch for. About one percent of people bitten develop a severe reaction that can lead to West Nile Fever, which has long-lasting symptoms:

Once you’ve been bitten by an infected mosquito, you become immune to the virus whether you develop symptoms or not, so you cannot get it again.

Most people have no symptoms, but the small percentage of people that do develop a minor infection from the virus can expect symptoms such as these:

Occasionally, other symptoms may develop:

There are no specific medications or treatments for mild cases of the virus.

Who’s at a Greater Risk of Infection?

A person’s age, current health and other factors can play a role in how an individual reacts to the virus. It is important that you know what to watch for in children and the elderly who may have sustained a West Nile mosquito bite.

The elderly or individuals with compromised immune systems are at a greater risk of developing West Nile Encephalitis, a potentially fatal inflammation of the brain.

You should watch your loved one’s closely for symptoms that indicate a more severe reaction, especially in the elderly:

Anyone experiencing these symptoms needs to seek medical attention. These are symptoms of West Nile Encephalitis. West Nile virus is not fatal to everyone who contracts it. Only a small percentage of people develop the more severe neurological conditions that can be fatal.

Your doctor can diagnose West Nile Virus and further complications in one of three ways:

West Nile Virus treatments depend on the severity of the condition. Most people fully recover at home taking over-the-counter pain relievers, getting rest, and drinking plenty of fluids.

In more severe cases, such as encephalitis or meningitis, there is no cure, but hospitalization is required to provide supportive therapy, such as medications to prevent other infections, intravenous fluids, a ventilator to assist with breathing and sometimes immunoglobulin drugs.

Mosquitoes can transmit West Nile Virus to dogs, cats, horses, and other domestic animals. You can protect your animals by understanding the West Nile symptoms in dogs, cats and horses. The symptoms are not the same in all animals. However, like humans, older animals and those with weakened immune systems are more susceptible to the virus and its possible complications.

Symptoms can begin within a day after the dog is bitten, and may be more or less severe depending on your dog’s immune system and how he/she reacts to the virus. Dogs, like people, are also at risk for encephalitis, which can be fatal if left untreated.

Your vet can draw blood and conduct testing to determine if the dog has West Nile Virus and if there are any signs of encephalitis. Dogs usually fight off the virus in a few days, but if the dog is not recovering, he/she will need vet care, including intravenous fluids.

Cats can contract West Nile Virus from mosquito bites and from eating infected bird carcasses. Cats generally show only mild signs of the disease, such as lethargy and a mild fever, but the more severe symptoms are not common in felines. It’s not likely that you would notice any unusual behavior or signs of West Nile symptoms in cats.

A horse bitten by a West Nile mosquito can begin to show symptoms in 5 to 15 days. Like people and dogs, the symptoms can vary based on how the horse reacts to the virus.

Some of the most common West Nile Virus symptoms in horses include the following:

Most horses can fully recover with at-home care with supportive veterinarian care. In severe cases, horses require hospitalization. During a hospital stay, your horse may require intravenous fluids and treatments to control fever. Other treatments may include:

A West Nile Virus vaccine is available for horses, but it must be given before an infection occurs. This is something you should discuss with your vet before mosquito season begins. Vaccinations are something to consider because about 17 percent of horses that contract the virus have a relapse or other complications after recovery. 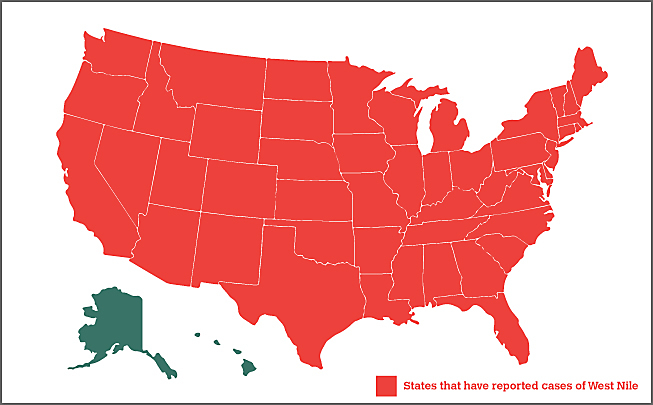 West Nile: Where Is It?

Most West Nile Virus infections are more common during the months of June through September. The only states that have not reported West Nile cases are Hawaii and Alaska. All other states have reported cases. A number of factors go into determining where seasonal outbreaks occur in states with West Nile:

No matter what type of West Nile mosquito lives in your backyard, the best way to prevent West Nile Virus is by not getting bit. This means you need an effective, long-term solution to greatly reduce the mosquito population in your area.

What is the best West Nile prevention? Not getting bit by an infected mosquito! This includes your family and your domestic animals. With all the mosquito control methods out there, you need to decide which ones offer your family the best protection.

You can buy mosquito repellents, use citronella candles, and even mosquito-proof your home. Using a repellent that contains DEET has been shown effective for keeping mosquitoes away, but it is must be reapplied often to keep working.

These methods can help reduce your risk of being bitten by a disease-carrying mosquito, but they are not long-lasting solutions, and you don’t want to spend your summer indoors. To fully enjoy your outdoor space and reduce your risk of West Nile Virus, the best protection is a long-term solution that is proven both safe and effective, like Mosquito Magnet® traps.

Mosquito traps work by converting propane to CO2, while mixing a precise amount of heat, moisture, and a secondary attractant to draw mosquitoes in. Once mosquitoes are drawn to the trap, a vacuum sucks them into a net where they dehydrate and die within 24 hours.

Maintaining the traps requires a few simple steps from you every 21 days:

It is important to keep the net clean, even when mosquito populations are not high. Pollen and other debris can clog the net, reducing the effectiveness of your Mosquito Magnet® trap.

Mosquito Magnet® traps begin to work immediately but take up to four weeks to break the breeding cycle of mosquitoes near your home. The traps control mosquitoes in a one-acre area around your home, and there are different models available that vary in price:

Mosquito Magnet® traps are backed by 18 years of research and over 15 patents, which have gone into making these traps technologically revolutionary.

Mosquito traps are more of an investment in mosquito control, but once you buy one, you can use it for years to help keep mosquito populations down around your home. Mosquito Magnet® traps come with a one-year warranty. They are the perfect solution to controlling populations of disease-carrying mosquitoes in your backyard and other large areas. They cover enough area to protect you and your pets from mosquito bites that can lead to West Nile Virus.

Mosquito Magnet® traps are the only traps EPA-registered and proven to be effective. If you want to ensure your family’s risk of West Nile Virus is greatly reduced, check out the various mosquito traps available and find the one that will work for your needs. These traps must be in place as soon as mosquito season begins if you want to effectively control mosquito populations through spring and summer.