There is no malaria vaccine currently available to humans. Some estimates place 40% of the world's population at risk for malaria. There are anywhere from 350 to 500 million cases of the disease throughout the world every year.

It is estimated that, of these cases, Malaria claims over one million lives annually. For children, it is the fourth leading cause of death in developing countries. So what causes Malaria and what is the best avenue for preventing Malaria from spreading?

You may have heard about malaria outbreaks on the news or have seen traveler advisories about this disease. But what is malaria? Are you and your family at risk? How can you keep your loved ones safe?

Malaria is a potentially deadly disease that’s caused by parasites and is transmitted by mosquitoes. There are actually different parasites that cause the disease – including P. falciparum, P. vivax, P. malaria, and P. ovale – and each parasite causes slightly different symptoms. When this parasite gets into your liver and then your bloodstream, you have malaria.

In the developed world, malaria is mostly eradicated but people can still catch the disease, especially if they travel to affected countries. Some experts say that even in Europe and the US, where malaria has been considered eliminated, more instances of the disease have been recorded since the early 2010s. Some scientists say that global warming, drug-resistant types of malaria, and human travel mean that even those who live in temperate, developed countries face a risk.

It’s important not to be too casual about this deadly disease.

In a healthy person, malaria can cause flu-like symptoms. For children and those who don’t have access to health care, however, complications and lack of medical care can make the disease life threatening. The CDC reports that in 2013 there were about 198 million cases of malaria around the world, and about 500,000 people died of the disease. Most of the fatalities involved children in Africa.

Malaria in the US and the World: Where Malaria is Found

Malaria is found all over the world, with higher instances in warmer climates in Asia, Africa, Australia, Central America, South America, the Middle East, the Caribbean Islands, and New Zealand. The most deadly strains of the disease can be found in the Solomon Islands, the Indian subcontinent, Africa, Papua New Guinea and Haiti. Sierra Leone, Liberia, and Guinea all have endemic levels of malaria.

If you are traveling to malaria risk countries, it’s important to understand the possible danger. If you know that you’re traveling to a malaria location, talk to your doctor before you travel to get medication that can help you avoid the parasites. The CDC has a handy online malaria risk map that shows you where malaria occurs. If you are going to be traveling, take a look at the malaria world map. Heading somewhere that malaria is common? Take extra measures to prevent mosquito bites and talk to your doctor before you get on a plane.

Travelers to areas hard-hit by malaria can also bring back the disease. In fact, the CDC reports that about 1,500 travelers each year come back to the US after contracting the disease outside the country. A traveler may contract malaria and get bitten once in the US, letting the local mosquito transmit the disease to others in the US. Most infections in the United States occur after someone has traveled to a malaria-affected country.

Another way that US cases of malaria can happen is when mosquitoes themselves get transported. Travelers returning to the US from locations where malaria is common might bring home more than vacation photos. Mosquitoes sometimes hitch a ride in airplanes or in luggage. They can survive in the airplane and can bite other passengers on the airplane or in the airport, spreading the disease. This is sometimes called “airport malaria.” 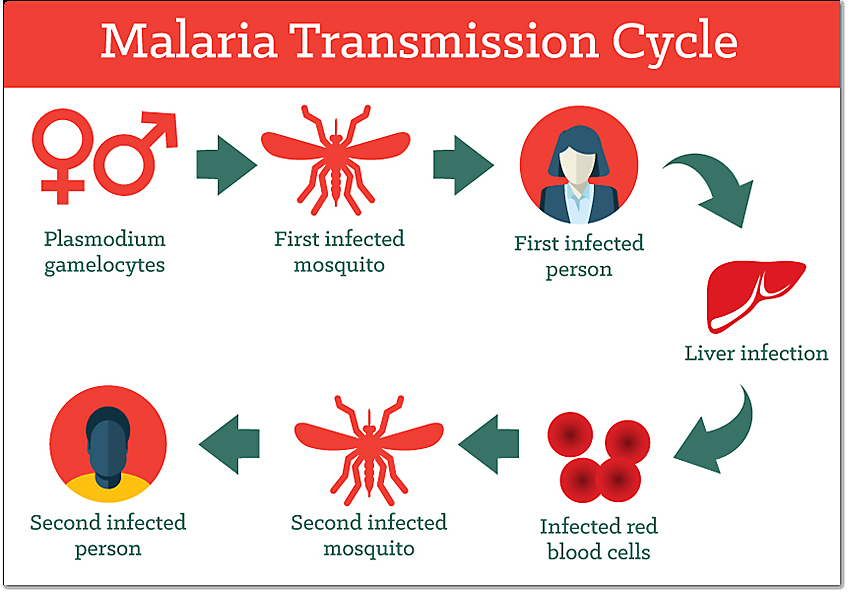 The bite of the Anopheles mosquito can transmit malaria from person to person. The process looks something like this:

This is usually how malaria is spread, but the disease can also be spread by sharing needles. A mother can pass malaria to her unborn child. In the past, blood transfusions sometimes led to malaria infection, although this is no longer considered a risk; today, donated blood is carefully screened.

At the start, malaria can look a lot like the flu. Patients may experience symptoms such as:

A patient affected by malaria may start with mild symptoms and then suddenly get dramatically worse. They may be in terrible pain, have trouble breathing, or suddenly experience seizures. Emergency medical help is needed if this happens.

Even once the first symptoms pass, some malaria parasites can stay in the liver and can cause relapses every few years. This means that the symptoms come back. Even if your symptoms are mild, it’s a good idea to talk to your doctor because if you have malaria, you need the right treatment.

Diagnosis: Do You Have the Disease?

Malaria is diagnosed with a blood test. If you’ve been bitten by a mosquito or have traveled to parts of the world where malaria is common and then have a fever, your doctor may run some blood tests. These tests can show you in a few minutes whether you have malaria and even which malaria parasite you have. Your doctor may run further tests to see whether any organs (like your kidneys or spleen) have been affected by the disease.

If you do have malaria, your doctor can suggest a course of medication. They will monitor the illness and your health to make sure you don’t develop complications. Your doctor might also suggest ways you can prevent passing on the disease. For example, you will be asked not to donate blood.

One of the problems with diagnosis is that malaria has such general symptoms. Someone who runs a fever and gets chills may assume they just have the flu. They might “wait it out” at home rather than going to the doctor, delaying treatment. Even doctors might not suspect malaria right away. Since malaria is not that common in the US, a doctor might not automatically check for malaria if a patient shows up with what looks like the flu.

Malaria can easily get overlooked or misdiagnosed, which can mean patients don’t get treatment and may pass on the disease. To help your doctor, stay alert for malaria symptoms. If you travel somewhere where malaria is a risk and then have a fever, see your doctor right away and explain that you’ve traveled where malaria was present.

It’s important to get proper treatment for malaria immediately. Left untreated, the disease can get worse. If complications happen, malaria can prove fatal. Young children, the elderly, and those affected by serious disease face a higher risk of being unable to fight off the disease.

Malaria can attack red blood cells and can lead to very high fevers, which can be hard to fight off. Pregnant women can also be at risk. They may not be able to fight off the symptoms as effectively, and the disease can cause low birth weight for the baby and other possible complications.

If you are diagnosed with malaria, your doctor will likely prescribe some form of medication. You may be given one of the following medications:

The exact treatment you get will depend on a few things, including your medical history, your symptoms, and the type of malaria parasite you have. If you are pregnant, you may not be able to take certain anti-malarial drugs.

One big problem with treatment is that some malaria parasites have become drug-resistant, so you might have to change medication if one treatment is not working or your symptoms get worse. Your doctor will work with you to find a medication that helps.

How to Prevent Malaria

There is currently no vaccine for the disease, although scientists are working to develop one. Scientists with the CDC and other organizations agree that a big part of preventing malaria stems from thinking strategically and avoiding mosquito bites. There are several things you can do to keep your family safer from malaria:

If you’ve taken precautions but have been bitten and develop a fever or other flu-like symptoms, visit a doctor right away. If you do have malaria, you’ll also want to take steps to avoid getting bitten by mosquitoes. If you get bitten, you could help spread the disease to others.

Mosquitoes are public enemy number one when it comes to malaria. When experts are asked “How can malaria be prevented?” most agree that there is one major solution: reduce the risk of mosquito bites. Unfortunately, mosquitoes are everywhere.

Use proper control methods. Use mosquito zappers, insect repellant, and citronella candles when you’re going to be outside.

Add smoke. If you’ll be sitting outside, consider using a fire pit or campfire to create smoke. Most insects do not like smoke.

Use mosquito traps like the Mosquito Magnet® traps. Traps reduce the mosquito population near your home. Unlike pesticides, traps are non-toxic and can provide a long-term solution to mosquito problems.

In addition to carrying the risk of malaria, mosquito swarms are annoying and carry the risk of other diseases as well. Enjoy your summers and protect your family today by controlling mosquito populations near your home.

Mosquito Magnet® traps are one of the few long-term solutions that reduce mosquito populations near your home. These traps turn propane into carbon dioxide (CO2). The traps mimic the moisture and heat of a person, attracting female mosquitoes. Once the mosquitoes approach the trap, they are sucked in through a vacuum and into a net. Without so many female mosquitos around to reproduce, the overall population of mosquitos drops.

You enjoy fewer bites, which means fewer itchy spots and a lower risk of mosquito-borne disease.