Non-Biting Midges, commonly called simply “gnats,” are often mistaken for mosquitoes by their appearance. They fly in great swarms for the purpose of mating. Midges are found in every continent of the world. Learn about what gnats are attracted to below.

On occasion, swarms of midges have been so thick they looked like clouds of smoke from afar.

What are midges? Non-Biting Midges, commonly called simply “gnats,” are often mistaken for mosquitoes by their appearance. Like “buffalo gnats,” adults have a hump-shaped back and are usually black, gray, or brown in color. The larvae are considered an essential part of the food chain in ponds, streams and lakes.

The lifespan of gnats or midges is fairly short. Eggs, which are transparent in color, are laid in large groupings over water and hatch within 3 days. The emerging larvae are white, red, or green and look like small worms with a dark head. These larvae drop to the bottom to feed on algae and other tiny organic matter.

Approximately four weeks later, the larvae are ready to pupate. Once it begins pupating, it will take 48 hours for the midge to emerge as an adult. Adults will survive for 5 to 10 days with the sole activity of mating to produce eggs of the next generation.

These populous insects do not bite, but they can be an annoyance just by their sheer numbers in a location. Midges are nighttime fliers, usually appearing just after the sun disappears behind the horizon. These insects can produce a loud humming sound which can be heard fairly far away.

What are gnats attracted to? Non-biting midges, or gnats, are often drawn to lights and can be found swarming around outdoor lighting in the summer. 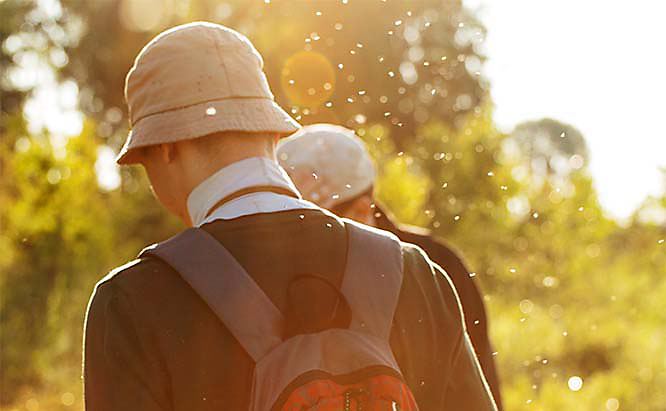 Midges fly in great swarms for the purpose of mating. After mating, the female Non-Biting Midges deposit their eggs over water, on plants in the water or in wet soil nearby.

With the short lifespan of the midge, approximately one month in length, there may be as many as 5 generations produced over the summer. Of course, the number of generations is dependent upon temperature and moisture in a particular breeding area. Dengue Fever is a very serious mosquito-borne disease comprised of four different strains.

The lifespan of gnats occurs in the following four stages: eggs, larva, pupa and adult. First, gelatinous egg masses of up to 3,000 eggs are laid on the surface of water. In several days to 7 days, eggs will sink to the bottom of the water where they are laid and then hatch. Larvae leave the egg mass and burrow into the mud. Organic matter in water and mud is used as food for developing larvae. As they grow, they gradually turn dark red. This larval stage of the lifespan of gnats takes 2-7 weeks depending on the water temperature. Larvae transform into pupae. The pupae stage lasts only 3 days. Pupae actively swim for the surface and adults emerge several hours later. Not soon after emerging, adult gnats will mate. Consequently, adults only live for 3 to 5 days, because these insects never feed once they reach maturity. In the summer months, the gnats’ breeding cycle can be completed in 2 to 3 weeks. Fall and winter will suspend the gnats’ breeding cycle by not allowing larvae to pupate. Although by the following spring, in late March or early April, pupation and the emergence of adults will begin again.

In natural and man-made aquatic habitats, gnats are one of the most common and most abundant insects in nature. Gnats’ breeding sites include just about any body of water. Some examples of gnats’ breeding sites include natural lakes, sewage oxidation and settling ponds, residential lakes and ponds and slow moving shallow rivers. Nutrient rich bodies of water can contain densities of over 4,000 larvae per foot. During the summer months, it is not unusual for several thousand adults per square yard of surface to emerge on a nightly basis. These emerging gnats can cause severe nuisance and other economic problems.

Where do gnats live? Midges, commonly referred to as gnats, are found in every continent of the world, even in the bitter cold Arctic and Antarctic regions. It appears the only limiting factor in their distribution is the presence of a body of water or wet soil.

Non-Biting Midges gather in large swarms near bodies of water, including streams, lakes and ponds. These midges are often found on the outside of houses as well as indoors. Those that are indoors will likely be found dead the next morning.

Non-biting midges, or gnats, are often drawn to lights and can be swarming around outdoor lighting in the summer.

Do gnats bite? Non-biting midges or gnats do not possess the mouth parts that allow mosquitoes to bite a mammal and obtain some of its blood.

Certain species of non-biting midges can lay up to 10,000 eggs in an egg mass.

After hatching, larvae drop to the bottom of the body of water to feed on the algae and organic matter found there. This location makes it difficult to control non-biting midges, unlike mosquitoes whose larvae remains at the surface area of the pond, lake, etc.

The Non-Biting Midge is not considered to be a vector of disease, although it can be responsible for allergic afflictions.

In some places along the Mississippi River, non-biting midges have been known to attach themselves to houses and other buildings by the thousands, entirely enveloping the buildings.

Roads along lakes or rivers in some locations can be so fully swathed in non-biting midges that they become quite slick, occasionally leading to accidents.

On occasion, swarms of midges in the air have been so thick, they looked like clouds of smoke from afar.